SENIOR JUDGE OF THE U.S. COURT OF APPEALS FOR THE NINTH CIRCUIT 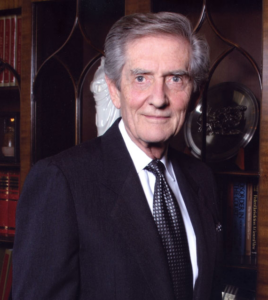 In 2006, the American Judicature Society honored Judge Wallace with its 24th Annual Edward J. Devitt Distinguished Service to Justice Award. The award is one recognizing “significant contributions to the administration of justice, the advancement of the rule of law, and the improvement of society as a whole”, and was formally presented to Judge Wallace by U.S. Supreme Court Associate Justice Anthony Kennedy in ceremonies at San Diego’s Spreckles Theater on October 19, 2006.

Born in San Diego, Judge Wallace obtained his undergraduate degree at San Diego State University in 1952 and his law degree from University of California Berkeley, Boalt Hall School of Law in 1955, where he was an editor of the California Law Review. He served in the United States Navy  from 1946 to 1949, then entered private practice in San Diego from 1955 to 1970 at the law firm of Gray Carey Ames & Frye.